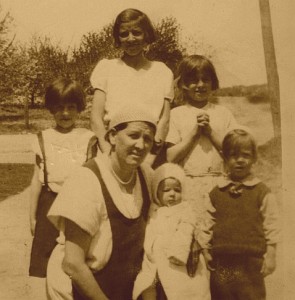 My grandmother with 5 out of 10 kids. My father is the one wearing the sweater vest on the right.

Oh, and the animals. Other than a dog, I had never owned an animal. We were to have chickens for eggs and meat and pigs for meat as well. We would get a couple ofÂ  goats for milk and making our own yogurt. We were going to be as self-sustainable as possible. We were going to ditch the world, and go off grid. We made preparations to the house, like ditching the furnace and using the wood stove, and buying oil lamps and candles. We bought a canner so I could can all our own food. We then realized our well was powered by electric. Hmm…we would put in a hand pump well…problem solved.
We then realized with a web based business, we couldn’t totally go off grid. So we did the closest thing. We canned, and froze and grew about 75% of our own food. Best two years of my life.

Our first chicks…Breakfast, Lunch, and Dinner.

We started with the easiest one first. Our first three little chicks were named Breakfast, Lunch, and Dinner. One does not name their food, or one gets attached, and will not eat said food. We soon added a few more to the flock. At it’s height, we had over 50 chickens.

It seems like we waited forever for a hen to lay an egg. We checked daily. When I walked into the chicken coop, and found the first egg, I thought Michael was playing a trick on me at first. He wasn’t. How wonderful. Our first egg. One would think it was our first grandchild.

The following year, we attempted at having our hens hatch some eggs. Henrietta went to roosting. We counted the days. The â€œgrandchild syndromeâ€ began. When the first chick hatched it was almost as exciting as when my own kids were born. By the way, never, and I mean NEVER get in the way of a mother hen. She will defend, and it won’t be pretty. Of course we ended up with eight roosters, who constantly went AWOL. Roosters create their own little â€œharemsâ€ each with a few hens, each crowing a little louder than the last. Let’s just say, it was quite noisy. We got phone calls from concerned neighbors who spotted the flock of roosters running up the road. I guess they thought they were running away, but they always came home at night.

Weâ€™ve been learning as we go, confronting challenges as they come up. For example, how to get a pig in onto the back of a truck? With great difficulty! Either she sensed she was on the way to the butcher or just did not like ramps. It nipped my oldest son during the struggle. He exclaimed, â€œOMG, swine flu!â€

If brown eggs are local eggs, and local eggs are fresh, how do we explain this?

Almost a decade has gone by since we bought the farm and made our dream a reality. The old farmhouse had a storefront, but is now the production workshop where we make our natural healing products. The property is shaped like a cloverleaf and covered with red clover, dandelions, plantain, and other wild healing herbs.

We grow our own organic herbs like lemon balm, St. Johns wort, comfrey, and lavender, to use in Cloverleaf Farm products. We also grow lots of yummy organic food. Right now the snow peas and green beans are starting to come up. Weâ€™ll preserve much of our harvest. (Kids, expect pickles for Christmas!) We press our own apple cider and make a delicious apple raspberry juice. We can lots of that for the winter. The best thing is our root cellar, where we can pick “fresh” veggies all winter long. 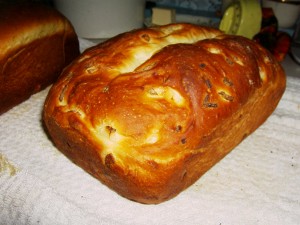 Growing and raising our own food has inspired us to see what other costs we could cut. We bake our own bread and crackers and cook from scratch when we can. We also have experimented with other ways Cloverleaf Farm could be more self-sustainable. In the evenings youâ€™ll still find us relaxing by candle-light. Not only is it romantic, we save a ton on the electricity. Ditching the oil furnace, closing off rooms in the winter, and switching to the wood stove has been the most successful experiment weâ€™ve stuck with.

There are still things we are figuring out. Why didnâ€™t that rhubarb jam set? When we doubled the size of the veggie garden, why didnâ€™t it produce more veggies? These questions may remain a mystery, but weâ€™ve learned a lot (and grown a lot) since buying the farm. Starting a health and wellness business has helped us become healthier, and itâ€™s awesome to be able to help other people live healthier too.

PS…we never did get a goat.