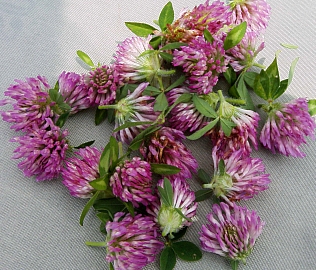 While writing an article on back yard herbs, my mind turned to spring. Green grass between my toes, and the warmth of the earth traveling up through my body. Ahh, it is a nice feeling.
It is summer in mind, yet in truth it is still winter. We will have winter until at least April.
That does not deter me from thinking about all the herbs in the back yard, that I will be picking again this year.
Red Clover is a wonderful herb. We allow patches to grow all over our yard. When we mow, it is like mowing around a obstacle course. I am sure our neighbors think we are crazy, but we don’t mind. We know the wonderful healing powers of red clover oil, or that it makes a delicious iced tea!
Red Clover (Trifolium pratense)
Some common Names: Red Clover, Purple Clover, Trefoil, Wild Clover
History
A a member of the bean family, red clover has a long history of being a nutritious cattle fodder, as well as a medicine.
Gerard knew it as meadow trefoil or “three-leaved grasse”. Its familiar three-lobed leaves were associated by medieval Christians with the trinity.
During the 1930s, it was a popular anticancer remedy. Red Clover contains phytoestrogens, and it should not be used on any estrogenic cancers.

The crescent markings across the clover leaflets were once viewed as a sign that the plant would help cataracts since, in accordance with the Doctrine of Signatures, a plant’s appearance indicates the ailments it treats.
From the hills of Tennessee, a cancer cure: “Place two or three teaspoons of red clover blossoms in a cup of boiling water, steep mixture until a tea is formed. Drink one cup a day”. In the 1917 herb book, Health From Field and Forest, it listed red clover as one of the best blood purifiers, especially in the case of cancer.
The Chinese revere red clover (Hsun Tsao) as a tonic, using the sap to treat colds and influenza. At one time in Chinese history, the dried plant was burned at altars as an incense.

Medicinal Parts
Flower heads of Red Clover contain volatile oils that are thought to have mild anti-inflammatory properties useful in treating eczema and other skin inflammations.
It also contains compounds that help calm coughs and reduce airway congestion.
Some contend that red clover is more effective than soy because it contains two extra isoflavones that soy does not have.
Chinese researchers have proven that the herb kills certain viral and fungal infections, has an estrogenlike function, and is an antispasmodic and expectorant.

Remedies
Apply freshly crushed red clover flowers are applied to insect bites and stings. A tincture can be used internally for eczema and psoriasis. Use a poultice or compress for arthritic pains. Oils, or Ointments are used on lymphatic swellings. An eyewash from diluted and well strained infusion can be used to treat conjunctivitis. Use Red Clover syrup for stubborn, dry coughs.
Its estrogenic effects may be of value in treating menopausal complaints. You can use Red Clover Oil externally, or drink red clover as a tea. Never ingest the oil!

Cautions
Red Clover should not be taken with Coumadin or other blood-thinning medication. Red clover contains coumarins, substances that reduce blood clotting.

When gathering the herb in the wild, it is advisable to check the blossoms carefully to make sure they are not moldy, or diseased. Be sure to pick where no pesticides have been used.