Who Is This Juliette de Bairacli Levy You Talk Of?

I’ve always been attracted to nature, and even as a child took to the woods. My studies in herbalism started in 1994, and continue to this day.

After becoming an herbalist in 2001, I was excited to share in all things herbal to anyone and everyone who would listen. I was already making products and selling them to family and friends and then in July of 2002, I opened an herb and alternative health shop in my hometown. This would give me a way of opening up a whole new market for my products. It was a dream come true for me. 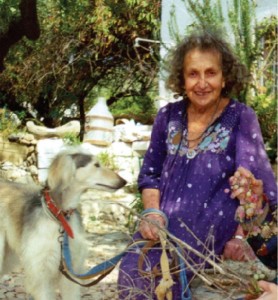 As I was sitting at one of the tables in the store having tea, a woman came running through the door with a bag of books, and a movie. “Have you ever heard of Juliette de Bairacli Levy,” she asked excitedly. “No, I haven’t,” I said. She then, in a enthusiastic fashion, explained who she was, and that she was coming to town in two weeks for a book signing. Juliette would be staying at her home, and they wanted me to host the showing of her movie “Juliette of the Herbs”, and have a book signing after. I agreed.

Within the next few days, I sat down and read two of Juliette’s books. Nature’s Children, and Common Herbs for Natural Health. I read up on who exactly Juliette de Bairacli Levy was, and realized all she had done for us modern day herbalists. She was the grandmother of herbal medicine. Why had I not heard of her before this, especially during my training? It didn’t matter. In a few days, I would be hosting the book signing, and I was going to meet the woman who would become my role model.

Meeting The Grandmother of Herbalism 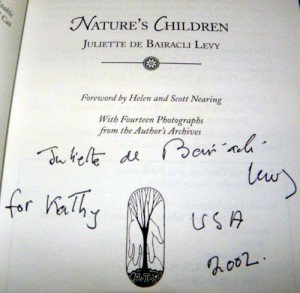 My signed copy of Nature’s Children. A treasure from the grandmother of herbalism.

A petite woman walked in the door with her escort. I welcomed her, and offered her a cup of mint tea. As Juliette sat sipping the tea, she talked with the numerous fans that had gathered. I remember I was in awe of all her knowledge. If she was the grandmother, I was the infant great, great grand child. We watched “Juliette of the Herbs”, and then she signed everyone’s book. After the movie, there was a question and answer period, and everyone, including me was eagerly taking notes of everything she uttered.

It was one of the greatest evenings of my life, and it was a great pleasure to have met her. I would get to meet her one more time at another book signing in town, but she inspired me to further my knowledge of herbal healing and she became my invisible mentor.

I am what I am today, because I met the grandmother of herbalism.

A Pioneer of Herbalism 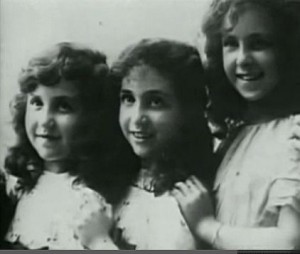 Young Juliette with her sisters.

Juliette was born on November 11, 1912 in Manchester, England. Her mother was born in Egypt, and her father in Turkey. Both were from Jewish descent. Juliette had three sisters, and two brothers and was raised in a somewhat wealthy family. The children had a nanny, and the family employed a chauffeur, maid and gardener.

Her love of healing and animals began at a very early age. Her grandfather, also an animal lover, would bring her a new puppy when he visited from Turkey. When the puppy became ill, and the veterinarian was unable to cure it, this gave Juliette the incentive, and determination to become a veterinarian.

Her early education was Lowther College, one of the best girls schools in Britain at the time. She was then sent to Universities of Manchester and Liverpool, as her father thought this was the proper thing to do for his daughter. After just two years, she left college. She did not like the way they were dissecting the animals to study them. Juliette knew that she wasn’t going to be able to learn what she really wanted to learn about treating animals naturally. She ventured out to live with the people who lived closely with their animals…the gypsies.

Over the next several years, the countryside where the herbs and plants bloomed became her classroom, and the gypsies became her teachers. She traveled with them in their nomadic life, and learned much from them. They taught her how to treat many animals including sheep, goats, horses and dogs.

During the 1930’s Juliette started a distemper clinic and started treating animals with her herbal remedies. This is also when she started to naturally rear her Afghan Hounds. With this clinic, she gained a reputation, and the Royal vet would send her dogs to be cured. 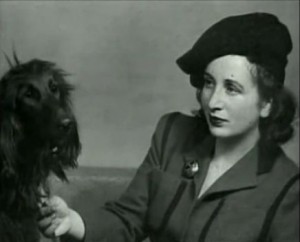 The Turkumans, a strain of Afghan Hounds that were raised by Juliette since the 1930’s have been raised “the oldest way in the world…the natural way”. At the time, the only Afghan Hound to win Best Of Show at Westminster was a direct descendant from Juliette’s original dog Nissim’s Laurel.

Also during the 1930’s Juliette realized that with the coming of vaccines and chemical medicines, that the gypsies way of treating animals might be lost forever. She began to write it all down. Her first book was published in 1930 by London: Fowler & Co and was titled “The Cure for Canine Distemper”. With this, she became a crusader for herbal medicine in animals.

In the 1940’s, while Juliette was traveling in America, Spain, France, North Africa and Turkey, she gathered herbal remedies from the nomadic peoples of these lands. Her Complete Herbal Handbook for Farm and Stable was published in 1951, and it was the first veterinary herbal to be published. Before this, the art was passed on only by the spoken word.

Throughout the years, Juliette traveled the world including Turkey, France, Spain, Greece, Morocco, the Middle East, and the United States. During these visits she both learned and taught much about herbal medicine for both humans and their animals.

For many years Juliette came to America each summer. These tours were for lectures, workshops and seminars on herbs and herbal medicine. Here in America she became recognized as the grandmother of the herbal renaissance. In 1998, Frontier Herbs presented Juliette with a Lifetime Achievement Award for her contribution to the world of herbs. Juliette de Bairacli Levy died peacefully at the age of 96 in Switzerland on May 28, 2009. The herbalists of the world lost a dear friend on that day.

Instincts, The Gypsies And The Mother Goat 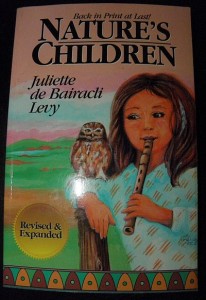 In the 1950’s Juliette was pregnant with her second child and went to live in the mountains of the Sierra Nevada, in Spain. Typhus was rampant, and she contracted the disease. Her natural instincts and the knowledge that she had gained from the gypsies, told her to fast. So, for the 30 days, she drank water and lemon juice. Bathing in the stream was also part of her healing process. She attributes this regimen to healing her.

During the illness, her daughter was born. She was told by the gypsies that her daughter, Luz, would not live. From fear, she called in the doctor. The doctor also told her that the child would not live through the night. Juliette was not going to let this happen.

She brought the baby out onto the terrace to get some air. There, below was a clump of opium poppy. She knew it was a drastic remedy to give to a newborn, but she felt that it would at least relieve some of her pain. She made a syrup, and fed it to her baby. Her daughter did not die, and is still alive today, due to Juliette’s instincts. She had never seen those poppies before, and something told her that they were the cure. She listened, and save her daughters life. 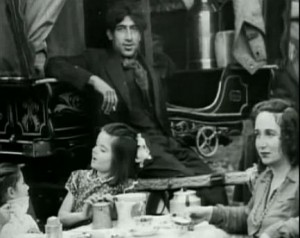 While Juliette became a friend to the gypsies, and learned much from them, the gypsies also became a friend to her. Being that she was so ill, she could not allow Luz to nurse. A gypsy friend offered to feed her, and Luz flourished. When the woman could no longer feed both her son, and Luz, Juliette chose to use the goat where she was living. Not only did the goat allow Luz to suckle from her udder, the goat learned the feeding schedule and came around each time on her own.

You shall die, and I shall die!
Take our places in the sky.
You and she, and he and I,
When the time comes, all must die.
That’s a game we would play,
Man and woman, girl and lad,
In gypsy camps far away,
Laughing times, yet passing sad.
Poppy crowns for everyone,
Red rose for the fairest one.
We would shout, King Death to come,
Laughing loudly, turn and run.
Then more the cry! Who will die?
Nor he, nor she, and not I,
Want that fearful power to fly.
We would pass the hours that way,
Bed with Gypsies by cool streams,
Golden days of dance and play,
Harp and flute and tambourines.
But poppy crowns droop and fade,
Feet grow weary, hearts afraid.
Time kills all in Gypsy Glade,
Flower and tree, man and maid.
Gone the Gypsies, every one,
All who played the Gypsy game,
Left the earth, its mirth and fun,
Starry nights and hyacinth lane.
None can play that game alone,
Thus I want to hear the cry,
Come now! Leave thy earthy home,
Join the Gypsies in the sky.

Medicinal Herbs: Their Use in Canine Ailments, London: A.P.Tayler & Co, 1943.