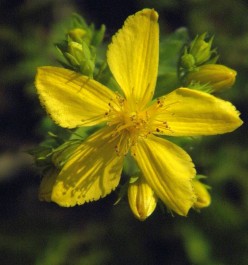 Nicknamed the wonder herb by many herbalist, St. John’s Wort (Hypericum perforatum) has numerous healing benefits treating a wide range of ailments. It is used both internally and externally for health along with a rich history in magickal rituals.

St. John’s wort doth charm all witches away,
If gathered at midnight on the saint’s holy day.
Any devils and witches have no power to harm,
Those that gather the plant for a charm.
Rub the lintels and post with that red juicy flower,
No thunder nor tempest will then have the power.
To hurt or hinder your houses: and bind,
Round your neck a charm of similar kind

Both Pliny the Elder and Dioscorides used St. John’s Wort for it’s wound healing properties. Dioscorides, a surgeon in the Roman army made many notes in his medical writings about the herb being used for burns and wounds.

The name St. John’s Wort came from very early Christians who named it after John the Baptist. The brightly colored, yellow flowers usually bloom around June 24th, the day that his birth is celebrated. In Europe, St. John’s Day is celebrated on the day of the Summer Solstice, which is normally around June 21.

The studies of today have proven the effects of St. John’s Wort in double-blind studies. Luckily, the ancient Greek, Romans, and other early herbal healers from centuries ago didn’t need these studies to know the healing benefits of the herb.

St. John’s Wort herb is a restorative tonic for the nervous system. It acts as a sedative and antidepressant and has an effect on both the mind as well as the body. Note: Please work with a qualified herbalist or other trained professional when dealing with an herb such as St. John’s Wort. It’s a wonder herb containing powerful properties that must be used correctly.

St. John’s Wort can be used as a tea, tincture, or pill to treat mild depression, anxiety, and panic attacks. It may be mixed with other sedative herbs depending on the diagnosis of the patient.

It is the high content of hypericin in the flowers that gives St. John’s Wort it’s medicinal benefits. In many parts of the world, particularly Europe, it is one of the most valuable and most widely used medicinal plants for nervous problems. Herbalists have long used it to treat anxiety, tension, insomnia, and depression especially associated with menopause.

A tea, or infusion, can be used for anxiety, nervous tension, irritability or emotional upsets, especially if associated with menopause or premenstrual syndrome. A tea would typically be drank 2-3 times a day, depending on severity of symptoms. Contrary to what you might think, more of the herb does not equal faster or better results.

Tinctures, which are made with alcohol, are taken for at least two months for long-standing nervous tension leading to exhaustion and depression. If taking a tincture, use about 10 drops three times a day. Again, more does not equal faster or better results. Herbs work differently than most Western medications.

If taking it in pill form, it is best to follow package directions, or the directions your qualified healthcare provider gave to you. Don’t be afraid to ask questions.

Due to it’s effects on the body and the mind, St. John’s Wort helps relieve excessive pain, removes the effects of shock, and has a tonic effect on the mind and body. This makes it especially valuable for post-surgical pain. It can be a valuable tool in helping to relieve fibromyalgia pain when used internally and/or used externally as a massage oil.

St. John’s Wort oil can be used straight or made into a salve. It helps heal muscle or joint inflammations, including tennis elbow, neuralgia, and sciatica. A few drops of pure lavender essential oil can be added for burns. When mixed with yarrow oil and white willow bark, St. John’s Wort is a wonderful treat joint inflammations. It is also used for sprains and cramps.

Massage the area gently with the oil four to five times a day. The oil will penetrate deep into the epidermis to help relieve nerve pain.

St. John’s Wort oil can also be used to help treat breast engorgement during the lactation period as it helps relieve the tenderness of the breast. 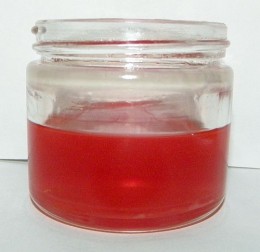 When infused in oil, the yellow flowers of St. John’s Wort makes a wonderful red oil. The oil is used to treat sciatica, skin issues, and muscle pain.

When infused properly in oil, the yellow flowers of St. John’s Wort makes a wonderful red oil. The oil is used to treat sciatica, skin issues, and muscle pain. If you have St. John’s Wort oil that is not red in color, it most likely contains another herb or ingredient that may be reducing the effectiveness of your oil/salve. Ask questions if it’s not red in color or find another supply.

The beautiful red color of the infused oil is caused by the hypericin content in the flower. The oil, which is a strong antiviral, is also antiseptic and styptic. It can be used on skin inflammations, burns, cuts, scrapes, skin ulcers and sores and many other skin irruptions.

To use St. John’s Wort oil to heal skin, wash the area clean, then gently rub into the area. Do this three to four times a day. The area may be covered to keep it clean if necessary. Use the oil or salve until the skin has healed.

St. John’s Wort can cause dermatitis or photosensitivity after use.

Some Drug Interactions (This is not a complete list of what it interacts with): Do not take in conjunction with any MAO inhibitors or other antidepressants, including Prozac, Paxil, Zoloft, lithium, Demerol, or dextromethorphan. Dextromethorphan is a very common ingredient in cough syrups. The combination can result in a very dangerous reaction called serotonin syndrome. It causes a high fever, confusion, muscle rigidity, diarrhea, and possible death.

Be sure to talk to your health care provider before taking St. John’s Wort herb. 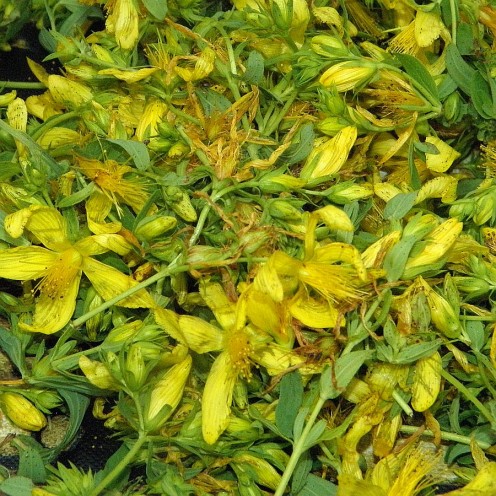 Stages of infusing fresh St. John’s Wort flower into oil. See how the oils turns a beautiful crimson red color over time. The oil is ready in 6 weeks.