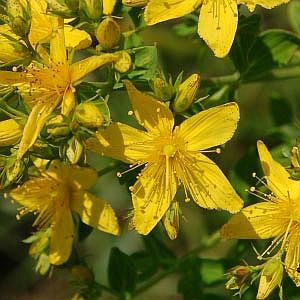 St. John’s Wort is a popular herbal remedy for anxiety and depression. It is taken internally as a tea, tincture, or in pill form. Herbalists use it for many ailments as it has many healing benefits. St. John’s Wort (Hypericum perforatum), also known as Klamathweed in some parts of the world, is actually used externally as well. Externally, the infused oil from the flower is used to heal nerve pain as well as muscle aches and pain. The oil is also used to ease the pain of Fibromyalgia.

The contraindications of St. John’s Wort makes it very important for you to know what you can and can not take if you plan on taking the herb.

If you are taking any of the following medications, you should not use St. John’s Wort. While it is a comprehensive list, there may have been some medications not mentioned. It is best to talk to your doctor, or health care provider.

If you are presently taking antidepressants, St. John’s Wort may possibly interact with the medications that you are already taking for your depression or other mood disorders. Taking St. Johns with these medications increase side effects and can lead to a very dangerous condition called serotonin syndrome.

The medications would include:

Tricyclic antidepressants. These would include Amitriptyline (Elavil), nortryptyline (Pamelor), or imipramine (Tofranil)

If you are taking other sedative medications, for either anxiety or stress, St. John’s wort may increase the effect of drugs that have a sedating effect.

Medications such as barbiturates, Benzodiazepines such as alprazolam (Xanax) and diazepam (Valium) should not be used in conjunction with St. John’s Wort. Drugs to treat insomnia such as zolpidem (Ambien), zaleplon (Sonata), eszopiclone (Lunesta), and ramelteon (Rozerem) should also not be used while taking St. John’s wort.

St. John’s Wort increases the effect of the medication, and an overdose can occur.

Stay clear of St. John’s Wort if you taking any form of birth control. There have been reports of women having breakthrough bleeding while using the herb. It may be possible that the herb interferes with the effectiveness of the birth control pills, leading to unwanted or unplanned pregnancies.

St. John’s wort can reduces the effectiveness of immuno suppressing medications. When these medicines are taken after an organ transplant or to control autoimmune diseases, it is important not to interfere with the drugs effectiveness. There have been reports of certain blood levels dropping, and the transplanted organ is rejected by the body.

The popular immuno suppressant drugs are below, but others could be prescribed.

Digoxin, which is taken as a heart medication, is not to be taken with St. John’s wort. St. John’s wort may decrease levels of the medication and reduce its effectiveness. This would also go for other medications taken to control heart issues.

St. John’s Wort herb seems to interact with at least two kinds of medications that are used to treat HIV and AIDS patients. Drugs that are used to fight HIV, and AIDS are called protease inhibitors and non-nucleoside reverse transcriptase inhibitors. When HIV infects a CD4 cell in the body, it copies its own genetic code into the cell’s DNA. The cell is then creates new copies of HIV virus. NNRTIs, also known as “non-nucleosides” or “non-nukes” for short, attach themselves to reverse the process and prevent the enzyme from converting RNA to DNA. This prevents the HIV virus genetic code from getting into the healthy genetic material of the cell. This helps stop the cell from producing new virus. These drugs help to keep the immune system in balance, and it is best not to use St. John’s Wort with any antiretroviral medications.

If you are taking anticonvulsant medications such as phenytoin (Dilantin) and valproic acid (Depakote) for seizures, it is best to stay clear of the herb St. John’s Wort.

Asthma and Other COPD Drugs

For those who suffer from asthma, emphysema, chronic bronchitis or other COPD disorder, and are taking theophylline, you should not take St. John’s Wort.

The herb can reduce levels of this medication in the blood causing severe health issues.

Medications to treat migraines called Triptans, should not be taken if using St. John’s wort. The herb can increase the risk of the side effects of the medication, including serotonin syndrome.

If you are taking blood thinning medications such as Warfarin, which is an anticoagulant drug, St. John’s wort reduces the effectiveness of them.

By taking both the herb and the drug, this would increase the chance of sudden heart attack or stroke, or death.

Drugs that are used as antifungal medications such as ketoconazole (Nizoral), itraconazole (Sporanox), fluconazole (Diflucan)

Alcohol of any kind acts as antidepressant in the body. It should not be consumed if you are taking or using St. John’s Wort.

St. John’s Wort Oil is used to treat nerve pain such as sciatica. It can also be used to treat pain from Fibromyalgia. The oil makes a great massage oil for body aches from overexertion or exercise.

Work With Your Doctor

If you are taking any medications, including to but not limited to the ones that are listed here, it is best to talk to your health care provider before taking St. John’s Wort. Many doctors don’t understand herbs and all their components, so finding a herbalist, or someone well versed in herbs may be helpful in your health care decisions.

Whether you choose to use St. John’s Wort internally for anxiety and depression, or externally for aches and pains, the side effects would be the same. Remember, the skin is our largest organ, and if you are applying St. John’s Wort Oil to you skin, it is being absorbed into your body.